Forum rules
Do not to post anything abusive, obscene, vulgar, slanderous, hateful, threatening, or sexually-orientated.
Do not post anything negative about any player.
No advertising other games.
The management reserves the right to delete or lock threads and messages at any time.
Read the complete SIM rules and legal information.
Post Reply
35 posts 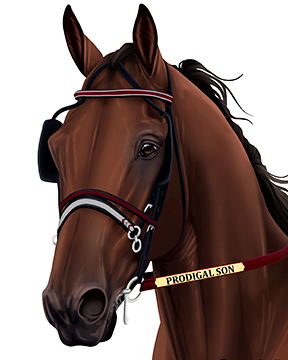 I don't have a headshot for this guy yet, but I imagine it will come one of these days when my real life horses and cars aren't giving me so many unexpected bills! Prodigal Son is such an incredibly pleasant surprise in a breed that I have had very little experience in. Just a few years ago, I was just breaking into Standardbreds when a dispersal sale came up. I spotted what looked to be a fancy Scary Edgar filly that was a half sister to two millionaires, and I knew I had to have her. Ended up shelling out probably more than I wanted to spend ($500,001), but I got her.

That filly was named Starling (her dam is Clarise, and all I could think of was Clarice Starling from Silence of the Lambs). It took some time to get her fit, but she broke her maiden at first asking, then went on to get a NW2 and an allowance in her next 3 starts before her first stakes win at the end of her three-year-old year. At four, she only managed another stakes and an allowance win in six more starts before being retired. Her first breeding was to Red Hot Pace, and this little colt was born.

A little colt in a plain brown wrapper, he trained "freak" as a yearling. By week 10, he had his second work with proper equipment, and my eyes about popped out of my head when I saw the time. This late blooming yearling colt had just equaled the fastest time ever posted by a pacer, set by Catalyst a decade prior. He needed a special name, and at one point was called Zodiac, following a broader serial killer theme than just Hannibal that I'd semi-established, but finally settled on Prodigal Son, after my favorite new television show (also in the serial killer vein, of course).

I was a little nervous to debut him so early, but in week 8, he made his first start in the Wolf Parade Stakes in Alabama. He won fairly easily by a half length. He hasn't trained since the change over after week 8, but he may have matured if his second start was any indication. He trounced a short field in the Glidemaster Pace by 2 1/2 lengths, earning a 97 speed figure in the process.

He looks hot, Erin! Best of Luck with him!!
Top

Hey Erin congrats.....I said to myself last year after i saw a couple of his workouts that showed up on the pacer workout top 50 list that this horse was going to be very special....That race yesterday may be only the beginning of a monster career ....Good luck
Top

His headshot is here and he is HANDSOME! Thank you to the artist for bringing him to life. And he even has the little chevrons from my silks on his noseband!

Well, this year has absolutely not gone as planned. My guy has been pretty flat in every race, so he's basically sidelined for the rest of the year. He'll have two more starts in small races (is somehow still a late bloomer), but I'm not messing with any more than that just to save my sanity. If I show up in any big races, it will be with his stablemate, Confetti Cannon.
Castles Crumble - $45,000 | Prodigal Son - $25,000 | With Us in Spirit - $5,000 | Coming Soon War Like Me
Top

Well, I guess it was a closer loss than what he'd been having. I've done a trash job of handling this horse so far, so I shouldn't be surprised it wasn't a triumphant return to the races. He's in an allowance. Maybe get some confidence? I don't even know. But if he loses the allowance, I'm retiring him before I get so frustrated that I geld him.
Castles Crumble - $45,000 | Prodigal Son - $25,000 | With Us in Spirit - $5,000 | Coming Soon War Like Me
Top

Is this horse for sale or lent?
“Andrew if you curse in your signature again I'm banning you from the forum forever.” - someone upstairs
“No tenga miedo, me gusta grande culo chicas ” - Nini Hunter
Top

One word to answer all the questions relating to this topic.

As long as you understanding that most of these animals are almost exactly the same copy of one another you will feel more at ease when you see the race results. They all take turns beating each other up and trading wins. It's extremely difficult to get a mixer to dominate every week. Be happy during the hot streaks and try not to get down on yourself when they are finishing 2nd and 3rd.
A CAVAL DONATO NON SI GUARDA IN BOCCA
Top