Forum rules
Do not to post anything abusive, obscene, vulgar, slanderous, hateful, threatening, or sexually-orientated.
Do not post anything negative about any player.
No advertising other games.
The management reserves the right to delete or lock threads and messages at any time.
Read the complete SIM rules and legal information.
Post Reply
15 posts • Page 1 of 1

Back in Week 3 of year 60 I was looking through some broodmares in the greener pastures, a habit that once in a while bore fruit in the occasional Star, when I came across a mare named Lady With Charm. I already had a racing filly named Lady With A Plan, who was my first stakes winner if my records are accurate. Well, Lady With Charm wasn’t a stakes winner, and her dam-line wasn’t terribly strong, but I loved her name and that her sire was Spiritus Invictus so I paid the 5k for her. My heart nearly stopped when I checked her history and saw that she was a Blue Hen. I could have pinched myself, what luck!

Three weeks later, still mulling over who to send this hen to, I saw Danny Derby’s post in the forums saying that he would let every player have one breeding to his stallions. I checked and saw that he had only one dirt sprint stallion, the young but promising Togo. Overcoming my anxiety of somehow doing the lease wrong and annoying another player, I sent him Lady With Charm for the free breeding. Moments later I had my mare back plus a cute little colt, the spitting image of his father. I immediately named him Solarpunk, after my favorite of the “punk” aesthetics. Anxiety kicked in again. What if he got hurt? If you know me I’m perpetually low on money, or at least I was at the time. I couldn’t afford to insure him but also couldn’t afford to not do so. I can guarantee you I bought gamepoints just for this little guy, and in his notes I put the following:

“We bought insurance on him just in case he decides to be special.”

Then there was nothing to do but wait for gallops. When the night finally came, I fell asleep less than an hour before gallops opened. Instead I woke up groggy around 5 that morning and bleary eyed pulled up my training barn on my phone, clicked on my favorite little colt, and galloped him.

And thus for the second time my heart stopped. I bolted straight up and stared at my phone in disbelief. You see, I’d never even had a Stakes galloping yearling prior to Solarpunk, and now I had my very own Freak! After profusely thanking Danny for everything, I galloped my other yearlings and found I had 3 stakes horses in the mix. I had made it, finally, as a breeder of dirt sprint horses... If only for this season.

So here he is, the horse who I hope will put my stable on the map. I asked that he look playful and I’d say he definitely looks like he’s about to try something naughty. I love it, my little punk. 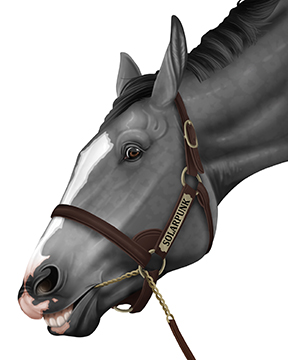 As of writing, he holds the fastest 3f work for yearlings at the start of this season in 34.71. I expect this might change as more people send their best to the track for their first works, but it’s still really cool to see.

Needless to say I feel like the luckiest player in the world, and I can’t wait to race him!
Top

Hoping to see huge things from this colt in his career, and not just for the Breeder Awards. He looks like he's going to be something really special, happy that you have him Autumn.
Danny Derby Stallions
Top

that is super super awesome Autumn- and a gorgeous headshot! congrats!
Faking it till I make it, and then faking it some more.

I was just telling Danny how V awesome he is , this morning; and how cool this dude looks right now in the workout rankings.
;p
Top

I love stories like this, best of luck with him!
Top

Good luck with him and congrats Autumn.
Top

Solarpunk turned out to be the fastest colt at 3f (34.57) and second fastest at 2f (21.40). But man there are some really fast fillies out there! I'm really proud of him, and can't wait to test him out on the track.

And thank you everyone for your comments and good luck wishes! If he turns out to as special as I'm hoping, I want to pay it back to the community. Would be fitting seeing as how he only came about because of generosity.
Top

The punk has been downgraded to Stakes progressive with the new threshold change, which genuinely surprised me! Maybe he is just a fast horse in the morning, or perhaps he is right below Freak?
Top

Solarpunk gave me my first graded stakes win tonight to stay unbeaten! Really happy with his ability to stalk the pace and come flying in the end.
Top

Congrats on the first graded stakes win! Here's to many more!
Top

We are now a Grade 1 winner! Another first!
Top

Autumn Blackmill wrote: ↑
6 days ago
We are now a Grade 1 winner! Another first!

Saw him pick up the G1 win on my results page tonight, super proud of your boy! Hope he keeps it rolling the rest of the year.
Danny Derby Stallions
Top