Forum rules
Do not to post anything abusive, obscene, vulgar, slanderous, hateful, threatening, or sexually-orientated.
Do not post anything negative about any player.
No advertising other games.
The management reserves the right to delete or lock threads and messages at any time.
Read the complete SIM rules and legal information.
Post Reply
58 posts

I'm crazy about them. How about everyone else?
Danny Derby Stallions
Top

I have 4. I am their servant, and I am grateful for the opportunity.
"I was afraid of Gigi, it was true." Oh yes. Be afraid. Be very afraid...
Top

I have five cats. Here they all are. 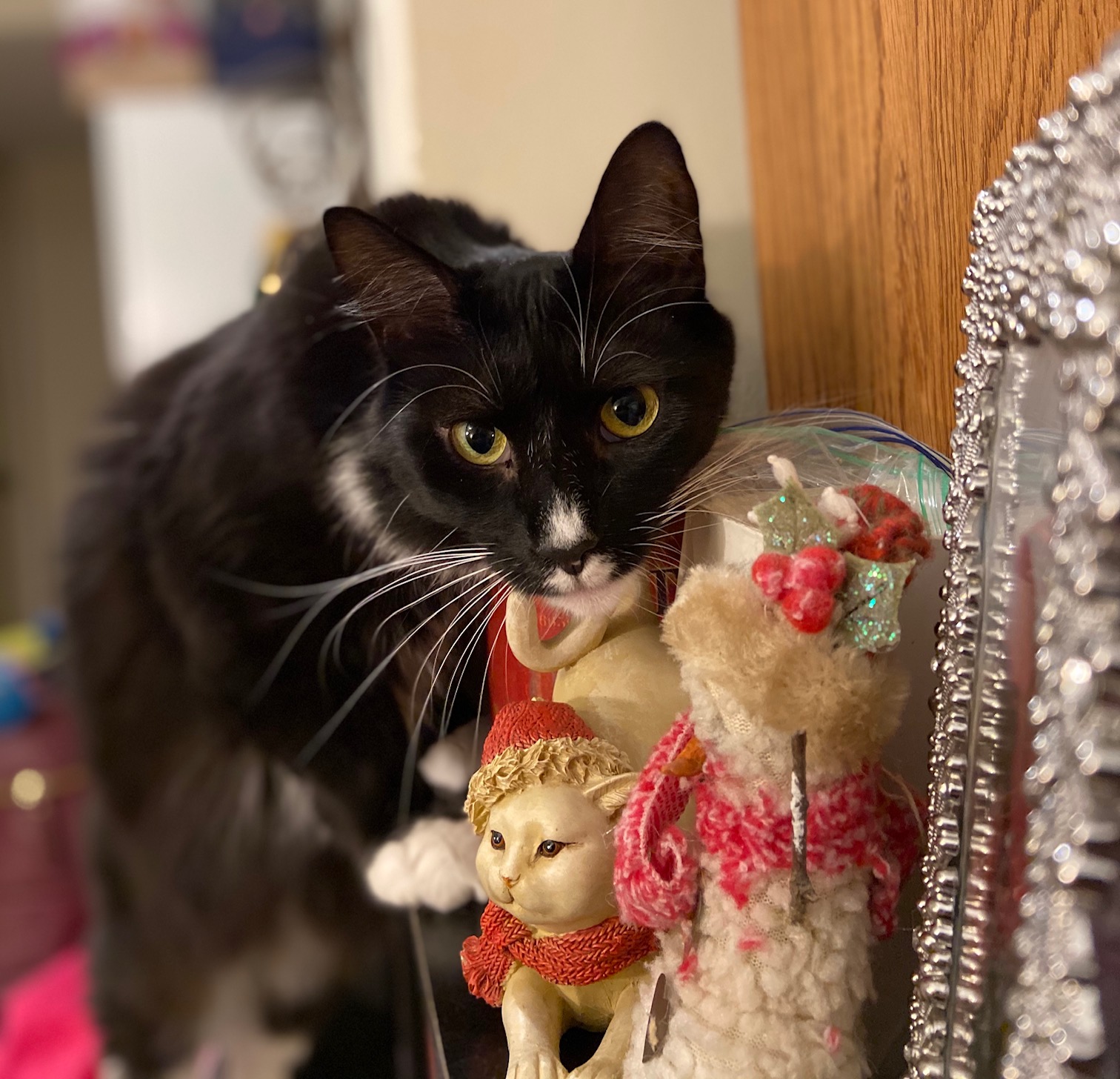 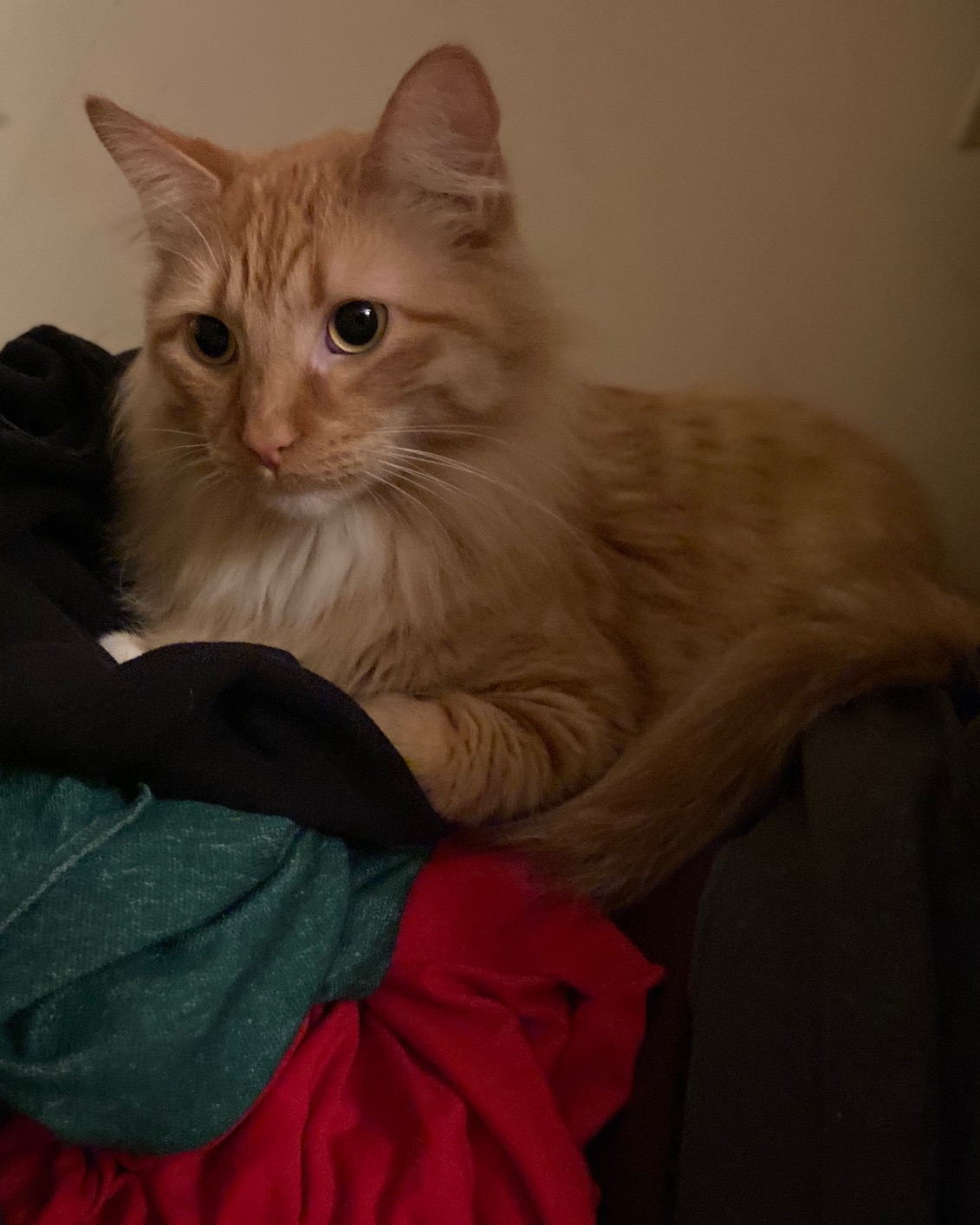 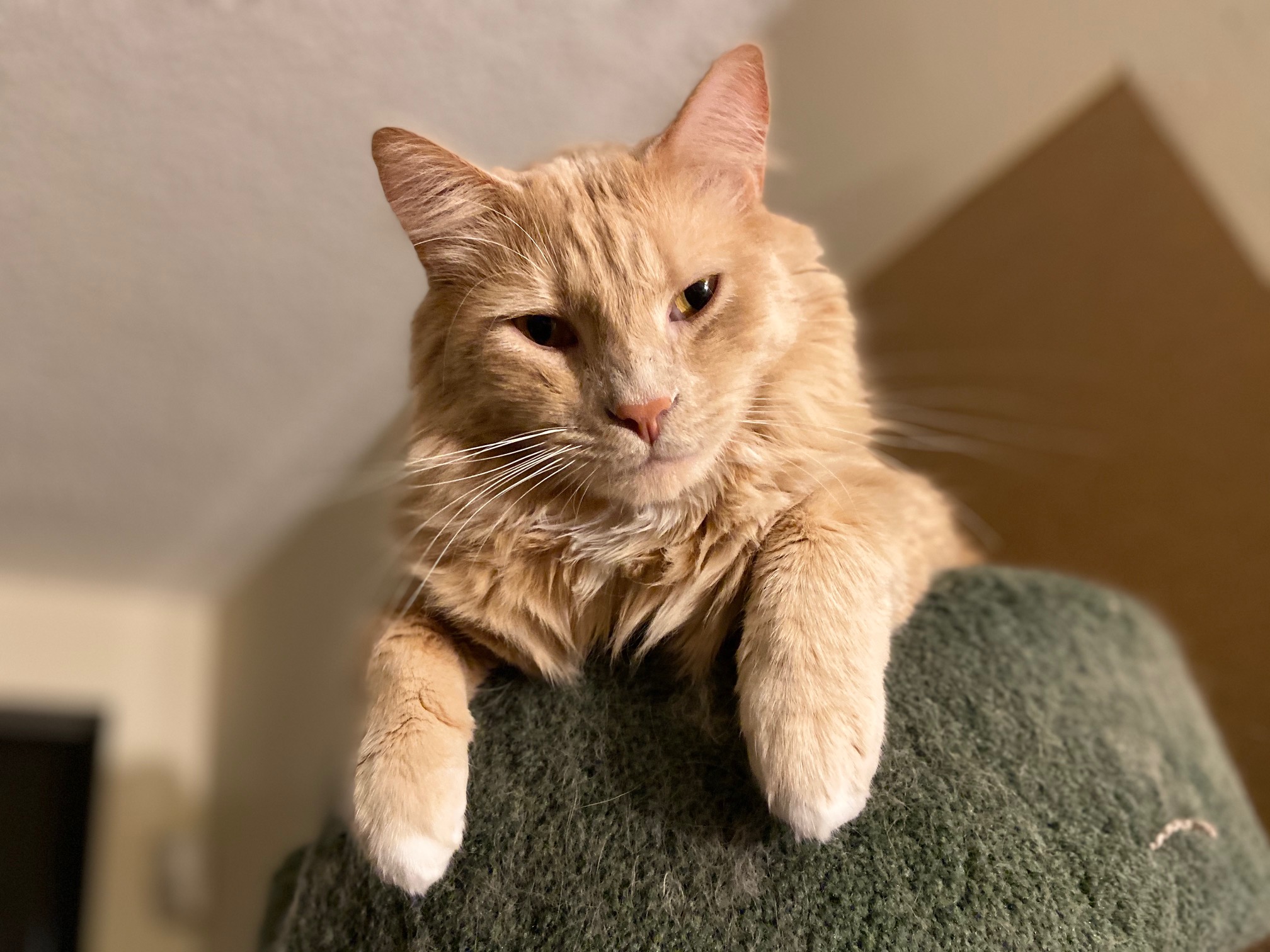 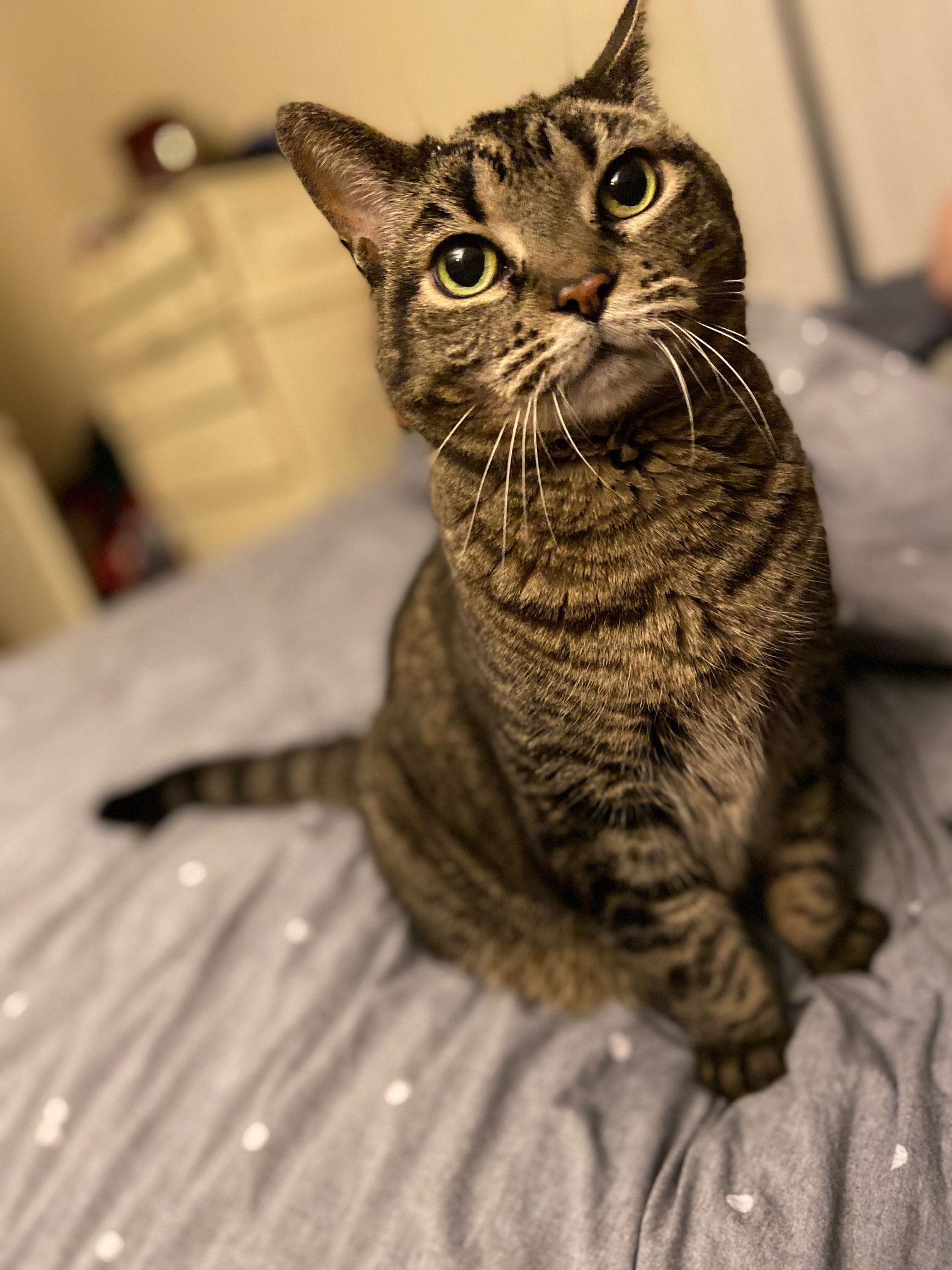 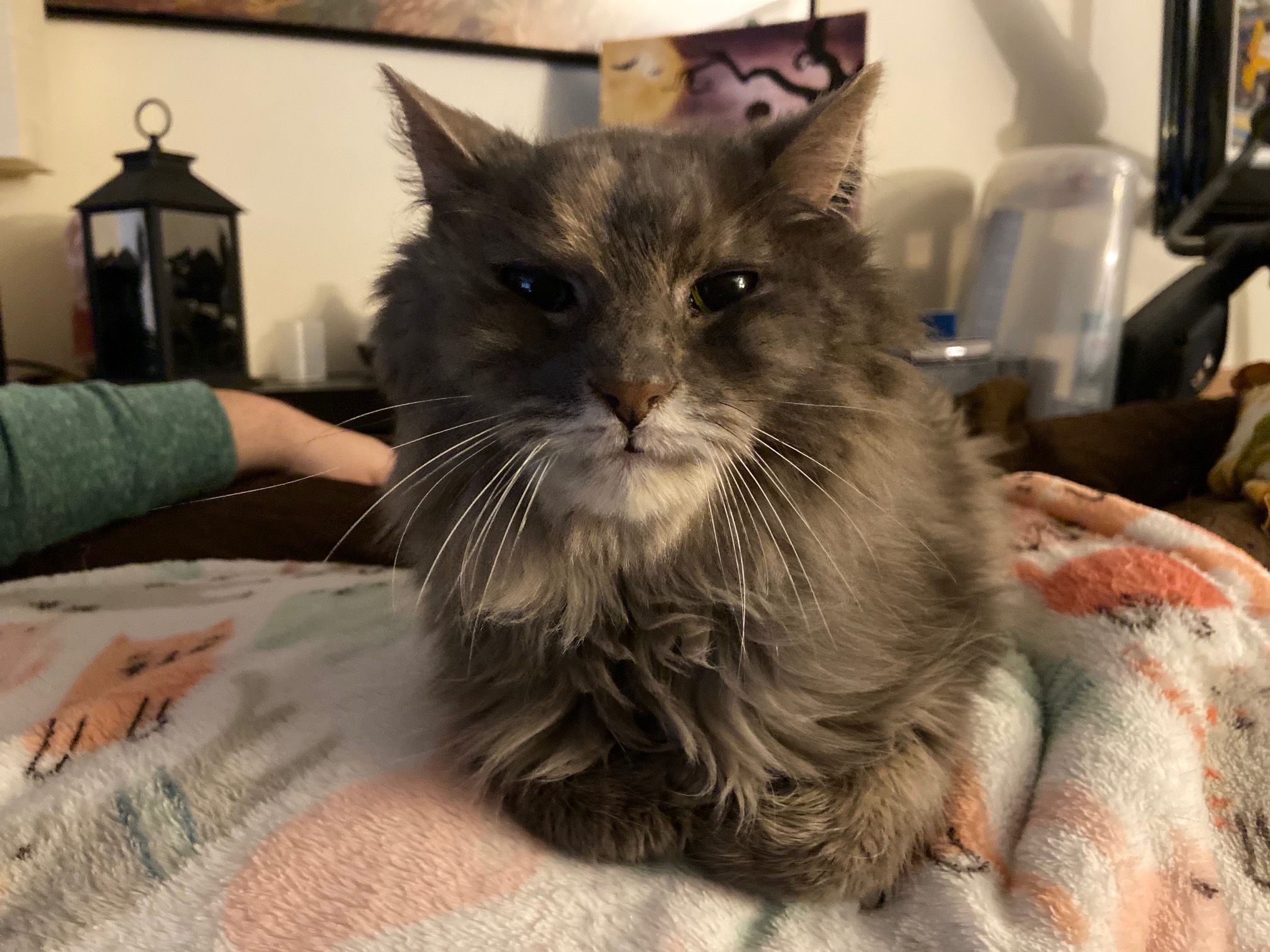 Cats are cool. I was obsessed with them as a kid... I wore a lion costume and refused to take it off, and ran around the house on all-fours like a cat

drove my mom CRAZY.
Now as an adult I'm more of a dog person, but a Ragdoll Cat is on my wish list. One of my friends has one and it's the coolest cat ever.
✾ ℕ𝕚𝕘𝕙𝕥 𝕍𝕒𝕝𝕖 𝕋𝕙𝕠𝕣𝕠𝕦𝕘𝕙𝕓𝕣𝕖𝕕𝕤 ✾
Top

SO many cats in my life! I currently have only 1 though.

This is my sweet girl Luna

She just recently tried to kill herself when she ate a foam mat and refused to eat for over a week...

My sister’s cat Norman Bates (as a kitten)

My old cat Link, he now happily lives in a home with no children or other pets!

Here’s Leeloo, no idea who she ended up with. The rescue refused to reply to any of our inquiries about her and how she’s doing. I hope she’s happy not still eating socks and cloths...

(As a not kitten)

An old friend’s cat Dovahkiin (as a kitten)

Okay, this is a thread I totally can get behind!!!

My foster that I've been taking care of for five months is finally moving on to greener (?) pastures this weekend. It is sad. But that means room for another one?
"There's no secret to training a good horse. It's a matter of being fortunate enough to get one."
"Funny how you often regret the stuff you didn't do more than the stuff you did do" - GG
Top

The Steward wrote: ↑
1 month ago
Okay, this is a thread I totally can get behind!!!

My foster that I've been taking care of for five months is finally moving on to greener (?) pastures this weekend. It is sad. But that means room for another one?

I don't know if I could ever foster an animal, I would become too attached and want to keep it. Heck, even here in the Sim, once my stable acquires a horse it's there forever, as I don't give them to AJ, or sell or put into claiming races anything I have. I will upon a few occasions buy a horse for another person as a gift, and transfer it over to them, but that's about the only way a horse goes out of my stable...lol.

But I'm glad there are people who can as it gives the shelter a chance to have more cages at their facility and allows some animals the chance to get use to a home environment if all they've ever known was living on the streets or in a cage - with some who even stress out due to the noise of a shelter. Older house pets often have a hard time adapting to that.

It has to be so bittersweet to have to say good bye to an animal after caring for it for sometimes months. But also in knowing someone really wants it - people who took the extra steps to fill out forms, talk to the shelter, and pay a fee, all that seems to weed out those who are just getting a pet on a whim or for a kid and actually expect the kid to care for it...which often doesn't happen either.

Thanks for doing that for that kitty, Em...and I hope the good bye isn't too hard on ya.

I used to live in grad student housing that allowed cats but not dogs. I had dogs and only limited cat experience growing up so I decided I needed a dog. I had quite the battle with the school administration to get permission to get a "companion dog." I got a puppy and turns out puppies are crazy and puppies whose owners work all day leaving them alone are REALLY crazy. Never get a puppy people. Well anyway I didn't think I could get permission to get a companion dog for my companion dog so I got a kitten to keep him company. And while this did backfire some in that I went from having a relatively puppy proofed apartment to having a kitten that could get EVERYWHERE and knock things down for the puppy to destroy. I learned I really really like cats. Turns out I was a cat person not a dog person all along. Who knew?

My life and cat limit my cat numbers but I do have one cat and volunteer with cat rescues to get extra kitty loving. I highly recommend shelter volunteering for the animal lovers out there, particularly those that can't have their own cats for some reason. Volunteering with groups that house cats at petsmarts/petcos are usually pretty minimal time commitments. 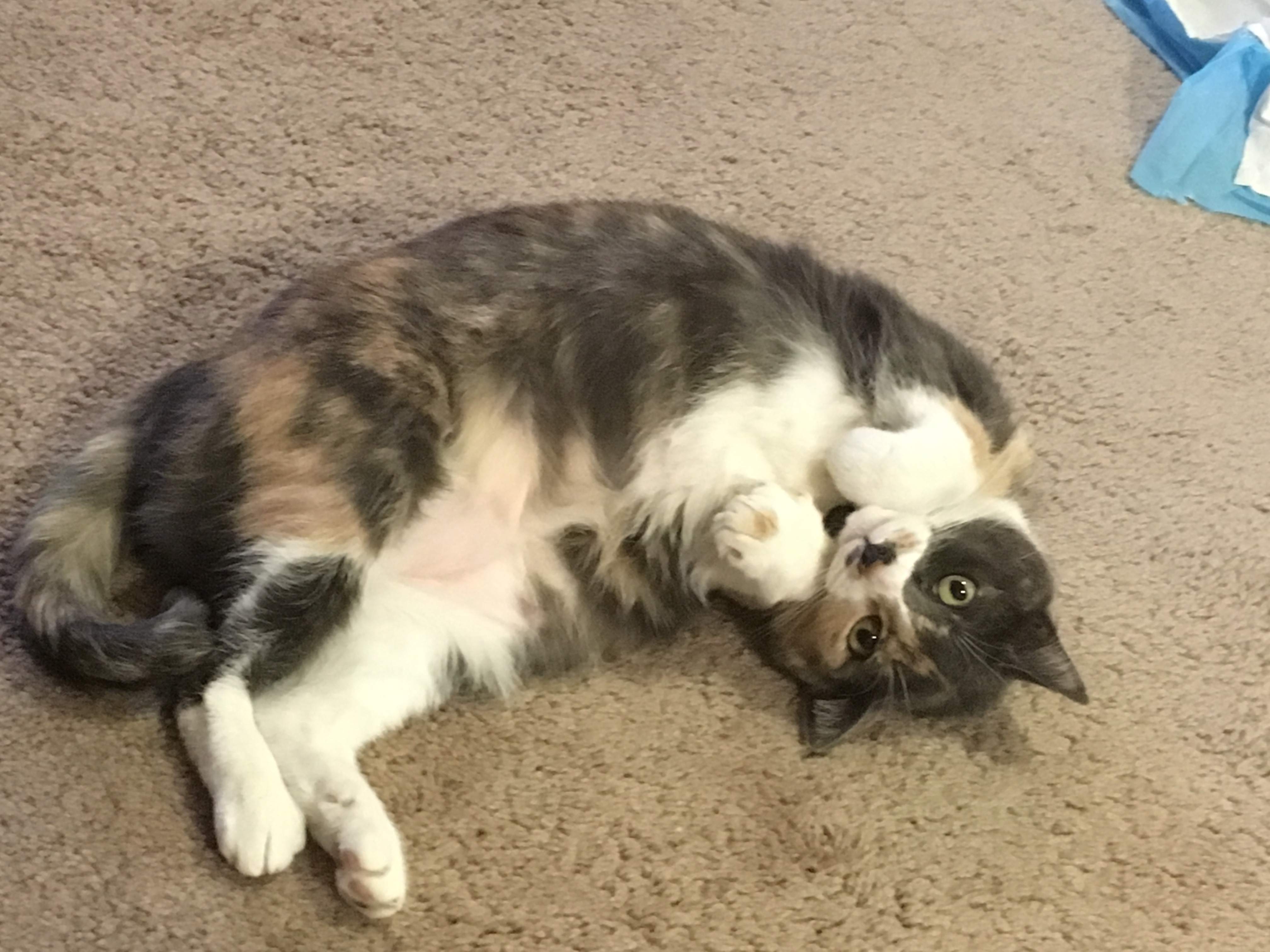 Am I the only one that hates cats and dogs?
Top

We are owned by a cat and have three dogs. . Fred is a barn cat that we picked up at a koi farm. We went to look at koi and came home with a kitten. Molly is a lab/husky, Leo is a Rhodesian ridgeback, and Bogey is a puggle.
Top

My first cat was a grey tuxedo, her name was Ashley and I had her for 21 years. I was so use to having a grey and white cat around, that I ended up having all my other cats being grey and white tuxedos. I got Kayla after Ashley was put to sleep. Kayla had spent about a year at an animal shelter and was over 5 years old when I adopted her. She was also severely abused by her former owners, and collected after police raided a house and arrested the husband/father. The wife/kids went to women's shelter and their pets were given up for adoption. This was Kayla's friend Shayle (her name uses all the letters in 'Ashley') and she use to love to go play in the shale piles next to my home, thus the name too. I adopted her when she was 1 year old, but sadly, she had already had a litter of kittens by then, not even done being a kitten herself. The shelter, when the kittens were old enough to be on their own, put her up for adoption. I didn't want a kitten, and chose her. I only had her for a few years, unfortunately, she didn't come home one day, and I think an owl got her

Some weeks after she disappeared a neighbor told me he found a lot of grey hair at the base of a tree in his yard that a large owl nested in, he thought it looked like long cat hair. And finally Song. She's the only cat I have now. I adopted her out of a Montana shelter when she was about 2 years old. That shelter was so crowded. The cat room was about a 12 x 12 foot and had about 20 free roaming cats and along one of the walls was 3 shelves, about 2 feet deep, that ran the whole length of the wall. The shelves were carpeted, but that was it for where the cats could laid down to sleep. Litter trays were on the floor under the shelving - it was clean enough, but there was no where in that room for a cat to be very far from another cat...and the only window was about 1 foot x 1 foot with mesh and bars on it.

Song's animal shelter photo and later after I had her for some months. I've enjoyed the photos of the other cats shown here. They sure come in a large variety of color and fur type, as well as eye color

Read a lot of really terrible reviews, but I liked the musical as a kid
" 'They're not going to kick me out.' - Tim Matthews" - Paul Heinrich
Top
Post Reply
58 posts