Forum rules
Do not to post anything abusive, obscene, vulgar, slanderous, hateful, threatening, or sexually-orientated.
Do not post anything negative about any player.
No advertising other games.
The management reserves the right to delete or lock threads and messages at any time.
Read the complete SIM rules and legal information.
Post Reply
8 posts • Page 1 of 1

My Pacer stallion, Highland Billy, has been retired to stud. I kept him racing at 6 because he’s so fun to race - he ended up winning over $1 million this year alone! ($2,870,190 in total earnings, making him the third-highest earning Pacer of all time). He won 9 G1s during his career (17 stakes wins total), as well as 4 SIMMYs. He is by Wanted Aliveornot and out of multiple stakes winner Highland Rosie (by Cumberbatch).

He has hypo’d A+ with all of my blue hen mares that I’ve tested, no matter the pedigree, and A+ with a star by Cumberbatch (A with three other stars that I tested by Wiggle It Jiggleit, Ancient Truth, and Hot Misschief respectively). I don’t keep a lot of star mares, so I only tested those few, but he also hypo’d A with a formidable by Cumberbatch.

I’m opening his stud fee at $20,000 since it’s the end of the year and lots of mares will have been bred already, but if there’s tons of interest I’ll raise that higher. Love this boy!! 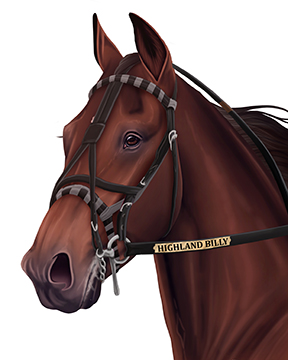 A helluva horse, Erica. Just nicked A+ with my best Blue Hen mare, but she's already bred this year.
Kinda glad "Billy" wont be around to run against next year.
Top

He is A+ to The Woman so he'll be seeing her next year =)
Harden Your Heart --> 8x G1 winner, The Only 3x Winner of the Doncaster Trophy, Pensioned
Top

He's amazing and sending some mares his way
Top

Very nice stud Erica! A+ to every mare I've tried so far.

I'm LOVING This colt due to his clean pedigree. Fingers crossed he turns out nice because he would be a great outcross to a lot of mares!
“It’s like I’m driving a Mac truck with the speed of a Porsche and the brain of a rocket scientist,” Gary Stevens on Beholder
Top